We’ve been back from our Uzbekistan and Kyrgyzstan trip now for a couple of weeks now… enough time to get over the jetlag and catch up on officework. I thought it was about time for a wrap up of the trip, as I keep reminiscing about all the amazing things we did.

In a nutshell, this was probably the best trip we’ve done so far (no, I don’t say that about every trip, and even though all of our small group tours so far have been great, there was something pretty special about this one.

It’s hard to pin point exactly what it was that made this trip so great. It could have been the fact that vodka was literally cheaper than water (approx $1 for a 750ml bottle… I kid you not!) or the fact that most of the time Graham was mistaken for Harrison Ford and we felt rather like a celebrity entourage. Both factors definitely helped, but actually, it was a combination of amazing sights, good food, friendly locals and a great tour group that made this trip so great.

On the whole, we found both countries to be clean, modern and friendly. Uzbekistan was neat orderly and conservative with a very Russian flair, whereas Kyrgyzstan was perhaps a little more grungy, though it felt more relaxed. In Uzbekistan, all the houses were painted the same beige/cream colour, and every tree trunk is painted white from the first branches down to the ground to provide better reflections for headlights, and to deter pests, which also added to the sense of order. 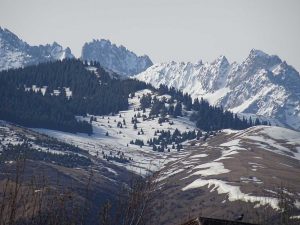 Where Kyrgyzstan is mountainous, green and lush, Uzbekistan is much dryer and has a lot of desert. Kyrgyzstan is much more rural and looked to be struggling more economically. Uzbekistan has the oil so they are doing marginally better but still seem to be bogged down in bureaucracy. Some of the more relaxing and memorable evenings were spent in small rural villages in Kyrgyzstan, like Ashu Village where we met friendly locals and stayed in a cozy cabin. We spent a lot of time in front of an open fire enjoying the local food… (possibly the best blackberry jam I have ever tasted!) 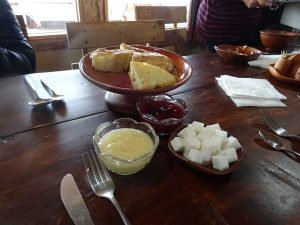 We were prepared to encounter a lot of Plov, the regional dish (a fairly basic meat stew) every night, but we were surprised at the flavoursome variety. A particularly memorable night was spent sharing a meal of Plov prepared by a local family at their house. Uzbeki hospitality at its finest. 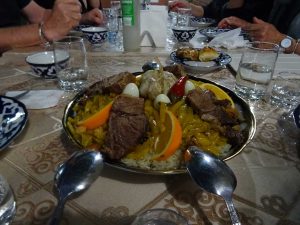 We were quite surprised by the border crossing experience, which left us feeling a little like we were in a 1980’s spy movie…! Passports stamped by armed border guards before trekking across into no-mans-land, then another passport stamp at the other end. There were hundreds of locals queuing and waiting in their cars to get across the border, so I guess we were in the tourist express lane.

The local currency, Soʻm makes you feel quite rich, as you end up carrying around great wads of cash amounting to the equivalent of 50 Australian dollars.

I admit I was a little worried about the internal flights we had booked, but it turns out that the planes and airports were as modern and well maintained as any you would expect in Australia.

It is really hard to pick out the highlights, but I have to say that our experience in Kyrgyzstan with the Eagle Hunters was a stand out, although I don’t think the hunting demonstration unfolded quite as expected. We had just had lunch in a yuhrt (where else?), in a village by a lake in the Issyk-Kul region. The guy turns up in a beat up old truck with an eagle, a couple of young kids and some rabbits. After some brief introductions, he gets the eagle and takes it about 300 metres up a hill. Meanwhile one of the children who is rather tenderly cuddling the rabbit, is instructed to let it loose. The rabbit hops around looking a little terrified, and rightly so, as the guy has now let the eagle go, and it is heading straight for the rabbit. Don’t worry folks… this story has an unusually happy ending… the rabbit took a beeline to the truck and hid underneath it, out of harms way. I’m pretty sure I wasn’t the only one who felt incredibly relieved! 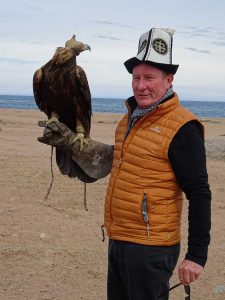 Harrison Ford and the eagle…

Other highlights included the sound and light show at Samarkand (which wasn’t planned – we happened to be there at the same time as the Chinese delegation, so enjoyed the spectacle at their expense), the 10 thousand year old rock paintings (petroglyphs) in Cholpon-Ata , the Afrosiyob fast train inTashkent (how do we not have such a train in Australia??!), Traditional silk and cotton weaving in Kokand (they make the traditional Ikat which is worn by most women), and the traditional Uzbeki Hamman (Turkish bath) from the 13th Century that we soaked our weary bones in. Wandering through Khiva, the old city that has been so well preserved was also amazing. 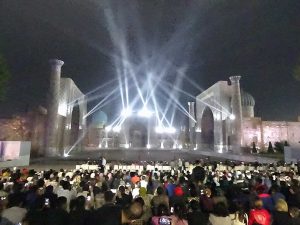 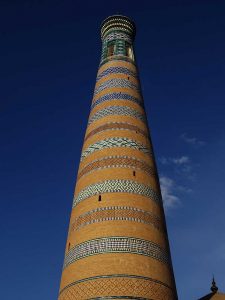 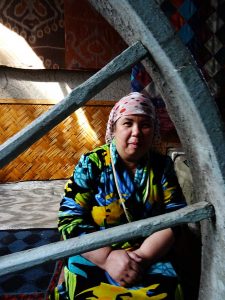 Another highlight was visiting the well known Rakhimov ceramicists studio in Tashkent on the last day of our trip. Three generations of men in the family producing these incredible functional works of art. And their garden was a sight in itself – pomegranate and fig trees… amazing. 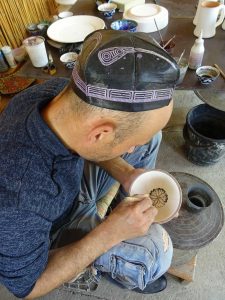 We always make sure to choose great accommodation when we organise our group tours, but this trip it was really exceptional, as were the guides. Regina in Kyrgyzstan and Rustum in Uzbekistan were so knowledgeable and spoke fantastic English. Regina was particularly passionate about her country which made the experience so much more interesting.

We firmly believe our small group tours are the way to see such amazing places. Why not join us on our next tour to India?